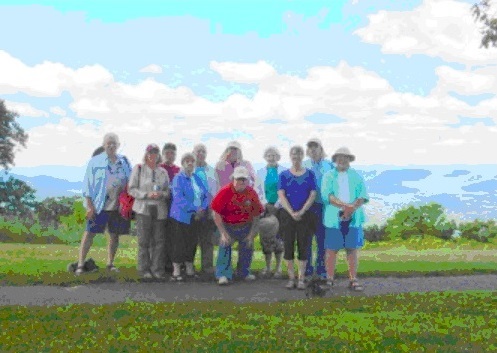 The trip was lead by Lillian Orchard, accompanied by Joe Bryant. Others were Bob and Janet Baylis, Bob and Jean Brewer, Ted Del Donno and S. Jane Arntz, Ed Jutras, and Dick and Jane Lyons.   The cars represented were NB, NC, and ND.  Bob Baylis pulled a customized trailer.

It was a long day of interstate highway driving, but traffic really wasn’t bad.

Skyline Drive was lead by Dick and Ted. Blue Ridge Parkway was lead by Bob Baylis.   Kudos to Lillian for scheduling the drive on a weekday; traffic was light and many slower drivers pulled over to let us pass.  The speed limits were 35 and 45.  I won’t say how fast certain members of the Club were going, but I’m glad there were no cops in evidence.

Drama: Bob’s gas light came on toward the end of the day (pulling the trailer reduced his gas mileage) Finding a gas station wasn’t easy and he ended up cruising down hills in neutral.

We continued south on the Blue Ridge Parkway, and I drove for a portion; I soon realized that the group takes it faster than I’m comfortable going.   We definetly had a gang of spirited drivers.

Art and Priscilla Caira joined us.

This was our most intense driving day: the Devil’s whip (NC 80) was without a doubt the most winding road of our trip.  We also did Diamondback.   We were late getting to the next planned activity, so most of us had ice cream cones for lunch.    Also the guided boat ride on Lake Lure was welcome relaxing.

The rhododendrons and azaleas along the Blue Ridge Parkway were blooming; Spring is a great time for a trip.  We had our first rain…….not much though.  We finally reached the Tapoca Lodge.

Recovery day.   We went in different directions.  (some even did laundry)  The famous “Tail of the Dragon” was very close to our lodge and some of us ended up doing it 3 times.

Driving thru historic Cades Cove we came upon a bear! It was 15 feet away from us eating vegetation.  Also 2 deer and another bear off in the distance.

We went off in different directions again. Some visited Tuckaleechee Caverns, others The Wheels Through Time Museum.  At night we ended up at Lillian and Joe’s fire pit at their “cabin” for a cookout dinner.

Art and Priscilla said “good bye” and headed back home to Florida, so we were back to 6 cars.  We drove on back country roads, heading east, and it certainly was the “Bible Belt”  In one day I counted 60 Baptist churches and 45 other.  My favorite name was Bible Believer Cowboy Church.  In Gatlinburg we sampled moonshine, ate at Bubba Gump Shrimp Co., and saw a Dunkin Donuts for the first time in days.  We drove the “Snake” which was 33 miles, 489 curves, 3 mountains, and 1 valley.

Up a curvy road, behind 2 slow moving vans, with 10 bicycles hanging out the back on a trailer, made me realize how lucky we had been while driving previous “Miata” roads. Most of the time there was very little traffic and we were the cars in front.

Ed stayed with us for a while, but he just kept feeling worse, so he ended up leaving us to drive directly to the next hotel.

On the “Back of the Dragon” (VA 16) an SUV kept deliberately slowing us down……sometimes even breaking on the uphill.   Lillian was in the lead and her car just died.  A pickup truck of kind girls and women helped us push Lill’s car off the road and held up traffic till the rest of us could get off to the sides.   One of them was concerned about us being out in the head and referred to us as “elderly”   After about 30 minutes Ted suggested opening the gas cap (it had worked on his lawn tractor) and the car fired up (vapor lock?)  Bob Baylis was miles away with his own problem (trailer)   We met again at a gas station where a food stand outside had the best pulled pork sandwich.

Later in the day we had to put the tops up because it was raining…..not too long really, not enough to complain about.

Ted and Jane left the group, so the trip report ends.

We certainly do thank Lillian for all her planning and leadership in making this a splendid trip. Spring was a great time to be “down south”…………. the woodland shrubs were blooming, the tourist season wasn’t in full swing,  and the heat hadn’t yet started.

The Lyons report that their total mileage from Littleton was 3,200 + miles.