After a rather inauspicious beginning, Les was rear ended on the off ramp from US 146 to RI 116. Fortunately, no one was injured; Les slowed for the merge, the driver behind didn’t. The beautiful Yellow Miata carried on like the tough trooper that it is and with some expertise will be returned to its former self. Adding insult to injury yesterday was Les’ birthday. For Les the day could only get better, and I believe it did.

Leaving the McDonald’s parking lot we were: Jack Austin, Les Barton, Ed Jutras, Frank Calvillo, Gordon Matheson & Gordon’s Mom, Gil & Sue Mello, Larry & MaryLou Hunt, Rick Mockler with his friend Becky, Jean & Bob Brewer. We were eight Miata’s and one that I suspect might have been the new ND. Mazda had very cleverly badged the car “Mini Cooper S”. Gil and Sue were non-committal about the origins of the car, but I think we had a peek at the future.

The day was a joint effort of Les Barton and Ed Jutras. Ed set up the ride to the restaurant and onward to Newport Harbor. Les arranged for the restaurant and harbor cruise. We set off in a mild rain over very interesting, hilly, curvy, and scenic roads more or less diagonally across Rhode Island. As we went along the day got better and better weatherwise. We began with the more adventurous tops down by the time we made the first stop all the tops were down.

We arrived at the Matunuck Oyster Bar at about 11 AM – the restaurant opened a bit early to accommodate our group. (the original plan was to sail on Newport Harbor at 1PM – that cruise was cancelled for technical reasons)

Les moved us to another boat for a 3 PM sailing, but it became too complicated to reschedule with the restaurant. As it turned out all was for the best. As Larry Hunt remarked. “This restaurant is far too good to be rushed”. If you like first class food, especially seafood, try Matunuck Oyster Bar in South Kingston, RI www.rhodyoysters.com Included in our meal was a mini celebration of Les’ birthday with Key Lime Pie, one piece, we are all watching our figures, with one candle and two birthday cards, signed by all those present.

After what turned out to be a leisurely lunch we headed for Newport Harbor. Ed once again found us some interesting roads including a trip over the Newport Bridge, which was more exciting for some of us than others. 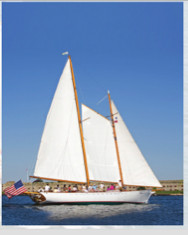 We were a bit tardy for our 3 PM cruise, but the good folks at Classic Cruises of Newport were very obliging, holding the departure a few minutes . We then sailed about Newport Harbor enjoying the various sights including Hammersmith Farm where Jacqueline Lee Bouvier, the future wife of JFK, spent time.

The House on the Rock, was once connected to the Jamestown Island but the great hurricane of 1938 washed out the connection. The House on the Rock is available for weekly rental in summer. It has no services from the mainland, generates it’s own electricity, collects it’s own fresh water, requires a boat and has no garage. Want to get away from it all – but not too far away from it all, this is the place and only $4000.00 a week; all according to Captain Green of the 72′ Schooner Madeleine our yacht for an hour and a half. 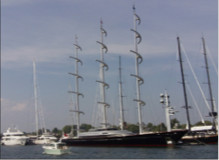 Some other interesting sights about the harbor. What is it you say. Gorgeous is the only answer I can think of.

We finished up our day with Ice Cream at Kilwin’s, homemade ice cream and chocolate delights.