Being a novice at the AMR II (or any race for that matter), I wasn’t sure what to expect. And then when I found out that we couldn’t use a GPS or map, I became increasing concerned. That being said, and even though it was a “tops up” kinda day with some light rain and threatening skies, my enthusiasm was not dampened as I raced off in Lucy, my 1990 red Miata, with my trusty navigator Bill to find as many of the sites as we could.

We found the first site, a wintery swing, fairly quickly. It was a ski chair lift that folks had turned into a swing on their front yard. The Trouts found the wintery swing too. We thought we found the next site fairly quickly as well although we turned out to be wrong. What we thought was an “aquatic mammal washed up along the side of the road” – a beached AquaCat sailboat – turned out to be a blue dolphin mailbox. That one’s still under dispute! 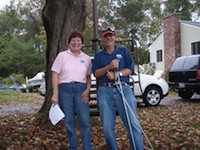 It was hard not to lose focus on the task at hand, find as many of the secret locations as quickly as possible, zooming along such a scenic route that took us up the Merrimac River through parts of Merrimac and Amesbury and then through Newburyport and Plum Island. Getting kicked out of the starting point parking lot by a worker for the Port Plaza who called Newburyport Police to evict us for congregation without authorization (a special shout out to Woodman Farm Stand on Low St., Newburyport for allowing racers to idle in their parking lot), the detours, all the road construction, and missing road signs certainly made things more interesting as well. I honestly don’t think there’s a Plant Street in Newburyport. At least we never found it. We also never found the old PLA boat house, an oversized mode of transportation (are you sure a whale doesn’t qualify?), and the seeds of change. We did however find a whole lot of fun and a great group of Amazing Miata owners!

Lunch in Newburyport overlooking the water was delicious and I have it on good authority that the ice cream run after lunch was equally enjoyable. For folks fond of statistics as well as outcomes, following are some details:

Now that I’m an AMR pro, I can’t wait until next year although hopefully I won’t have to walk through any more cemeteries 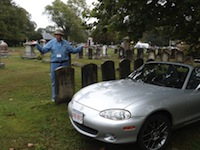 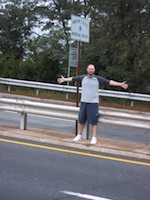