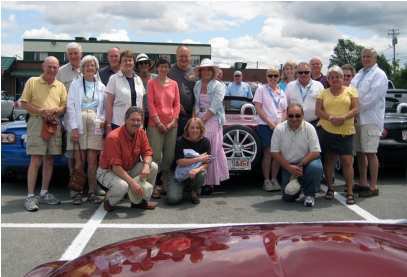 Our weeklong trip began on a sunny Friday July 1st morning from the I95 New Hampshire Visitors Center just over the Mass border. Our first nights destination was the Rossmount Inn in St. Stephen where we had early dinner reservations so we could catch the Canada Day fireworks in town.

It was all uneventful highway driving to lunch at Dysarts Truck Stop outside of Bangor Maine, after which the driving became more interesting as we sped along Maine route 9 (“the Airline”) to Calais and the border. After quick stops for our last US gas and the duty free store we crossed the border into Canada and made the final half hour to St. Andrews with time to spare. Our reward was a gourmet dinner and fireworks from the pool and porch. 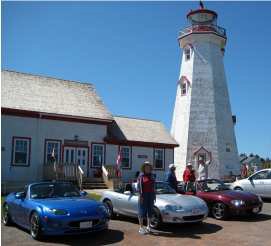 Up bright and early on Saturday for another big mileage day to get us all the way to the east end of PEI (Prince Edward Island). We took a different route through New Brunswick and some great scenery. Thanks to our waitresses we had an entertaining lunch stop at the Montana Cookhouse in Moncton, NB after which we crossed the 8 mile long Confederation Bridge to PEI. All 12 Miatas seemed to be a minor attraction at the Confederation Village where we stopped for a pit stop and then gas. From there it was pleasant driving through the rolling countryside to Souris and Lyn’s farmhouse at the east end of the island. We dined that evening at the Sandstone Restaurant in North Lake overlooking the harbor. As we were leaving we met a very enthusiastic woman from Connecticut who had a Miata and was spending the summer nearby. 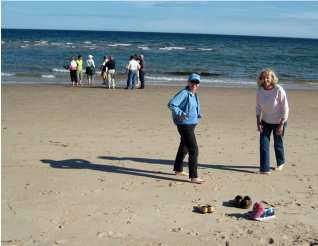 Sunday was a light mileage day as we toured the east end of the island. We visited the east end lighthouse, ate lunch in St. Peters, visited the Greenwich National Seashore interpretive center, walked on the beach near Lyn’s farmhouse followed by a group pizza dinner (ever have Donaire on a pizza?). 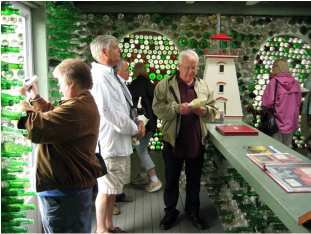 For our last day on PEI we journeyed to the central section of the island. As we drove through Charlottetown we stopped at a new Mazda dealer that had opened the week before. Were they surprised to see all of us! They were very nice, offered us coffee and let us use their restrooms, and we left them with a Mass Miata magnetic car sticker. Then it was cross country backroads to lunch in the town of Summerside. We realized we were going to have to change our plans due to the visiting royals Kate and William who were going to some of the same places we had planned to go. So after lunch we drove to the famous bottle houses – entire buildings built from glass bottles laid on their side. Very colorful and interesting, and with nice gardens as well. From there we drove north to Cavendish, home of all things Anne of Green Gables. 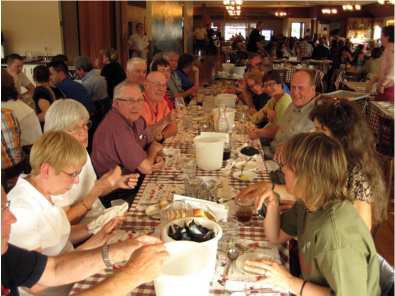 At Cavendish the group split up with some visiting Anne’s house and Cavendish attractions, while others drove to The Dunes gallery where we exercised great purchasing restraint. As we were leaving the Dunes we did catch a glimpse of the Royals flying overhead in a helicopter – very exciting! We all rendezvoused for dinner at the New Glasgow Lobster Supper restaurant for an island lobster and mussel feast. As we were leaving the restaurant a silver NB drove by and we could see he was eyeing all our Miatas in the parking lot. Five minutes later the same person came back in a silver NC to chat with us in the parking lot for a bit. Then it was a sunset top-down drive back to Souris via the Charlottetown harbor drive and more country roads after which the Brewers, Buskys, Comeaus, and Weinbergs bid adieu to the Cape Breton contingent whom we would not see again for several days. 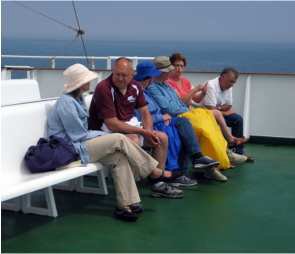 Tuesday morning we cleaned cars and farmhouse and were in line for the ferry by 1:00 for a 2:00PM departure to the Magdalen Islands. The 5 hour ferry ride was smooth and uneventful as many of us read and napped while Helen and David had fun conversing with a French-speaking couple. 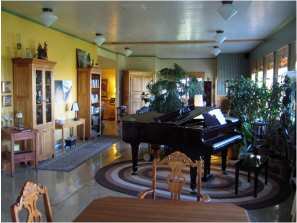 The Magdalen Islands (Isle de Madelaine if you’re from Quebec) are a small chain of islands connected by bridges and sand bars in the middle of the Gulf of St. Lawrence. They are part of Quebec and the language and food is most definitely French. By sunset we arrived at the La Butte Ronde (round hill), our very tastefully decorated home for the next several days. We hustled off to a restaurant in a nearby former monastery where our innkeepers Guy and Ghislain had made dinner reservations for us. Fortunately our young waiter Charlielie spoke enough English that we could communicate and order after a few tries. The food was excellent and Charlielie turned us onto to a concert happening in a few days that some of us went to (and ran into him there…). 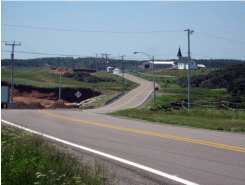 The next two days our four Miatas travelled to all the islands both north and south of our inn on Ile du Havre aux Maisons. We chatted with lobstermen on their last day of lobster season (one of whom showed us how to tell a male from a female lobster), visited a salt mining exhibit, visited a one-room schoolhouse museum, visited a fromagerie and a fish smokehouse, walked through an apple orchard and sampled island-made apple wine, and attended a wonderful a capella concert. Everyone we met was friendly and accommodating, and of course we ate fantastic French food everywhere we went. It would have been nice to have another day or two there to just relax and enjoy the superb food, but now we have another reason to go back there! 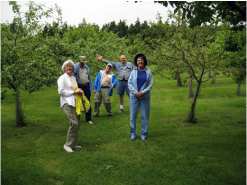 Very early Friday morning we said our goodbyes to Guy and Ghislain and boarded the ferry for an 8:00AM sailing back to PEI. This time we availed ourselves of a delicious on-board brunch buffet so that upon departing the ferry we could blaze on to St. Stephen by evening. On the car deck on the ferry I discovered another winning blue NC with Quebec plates parked two cars from mine. After departing the ferry we both stopped for gas in Souris and were quickly joined by several other Miatas that all happened in the area, and we all had a fine time looking at and talking about our little cars. 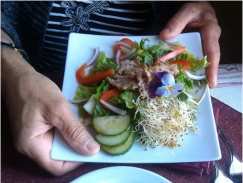 Because we had several days on the trip without ice cream (gasp!) we treated ourselves to ice cream at the Cows ice cream factory outside of Charlottetown before driving back across the Confederation Bridge to New Brunswick. We arrived at the Winsome Inn right at 9:00PM to the cheers of the Cape Breton group waiting for us in the driveway. 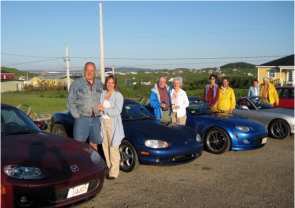 The only thing left to do was to drive back to Mass on Saturday so we could all attend the MOT event on Sunday. Some of us left earlier or later, but most travelled together after breakfast. We crossed the border back into the US (yes, they let us all back…) and then drove through the only rain we had that week to Bangor, and stopped again at Dysarts again for gas and lunch. Later that afternoon several cars stopped at Bob’s Clam Hut in Kittery, Maine for an early seafood dinner (very yummy) before the final hour or two to home.

Next Canadian trip to Newfoundland? 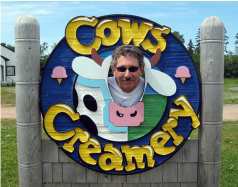 Submitted by Jon Weinberg
There are no comments - pitch in!