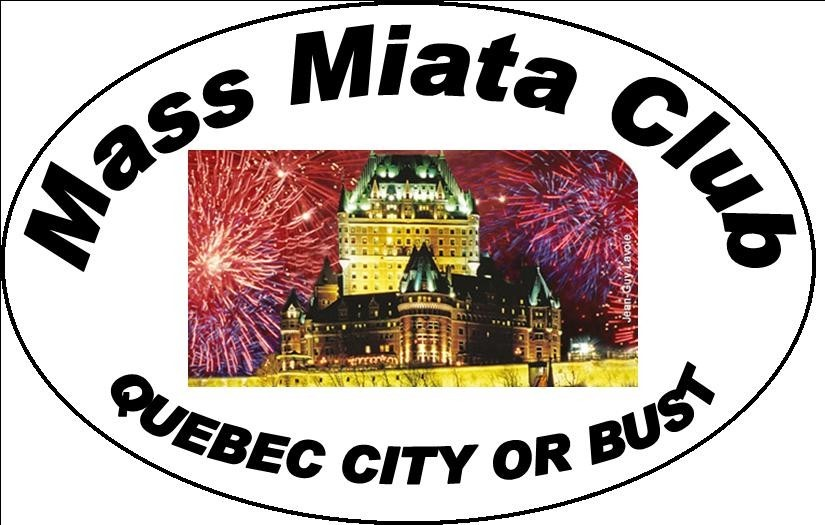 Our fantastic Quebec City trip began when we all met at the rest area in New Hampshire on Route 93. Rich and Carolyn issued incredible directions, radios were set and we were off, tops down following the sun. Our first stop was in St. Johnsbury, Vermont for a wonderful lunch at The Wine Gate Restaurant, a converted train station. After soup and sandwiches we continued onward toward Quebec.

The next pit stop at The Four Seasons Hotel, advertised with great signage all along the highway, was quite interesting.  Seems the Four Seasons is in a season long past, but we were able to make the necessary pit stop and have a few laughs after we departed while driving along the route towards the Canadian border. Fortunately Rich’s past border crossing reputation from last year’s trip to Montreal was not upheld. The border crossing was easy and painless and we continued on to the city. Entering the Old City was a little challenging with a few detours and one ways but we all eventually made it through the gates to the historic Clarendon Hotel 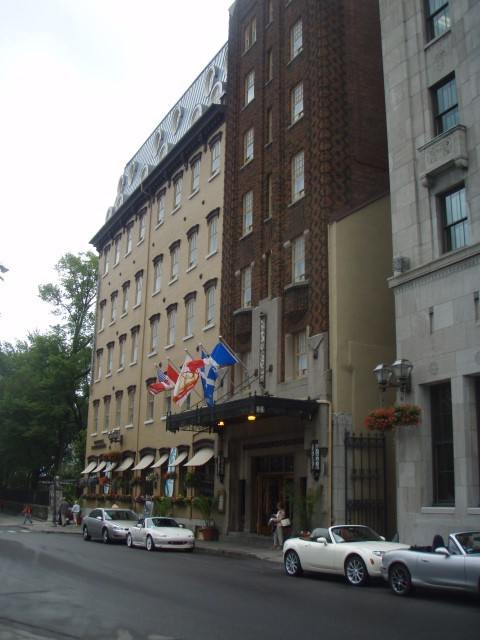 although we arrived by many varying routes. It turns out the Clarendon is the oldest hotel in Quebec and located within the Old City. It was within walking distance to everything. After checking in and unpacking we met to have dinner just three doors down from the hotel. We had a reserved upstairs room to experience the first of many relaxing wonderful meals. After eating the night was left up to individuals to do as they wanted. Most of us spent the next day exploring the Old City on our own or in small groups. We all found our way up and down the never ending stairs and hills exploring the many shops, galleries and restaurants throughout the old city. With their 400th anniversary celebration in full effect, there were sidewalk entertainers everywhere we went. The day was sunny and beautiful and touring was completely enjoyable, though many of our legs and knees don’t want to see another set of stairs. Some of us took horse drawn carriage rides or the 195’ high lift of the Old Quebec Funiculaire or a tour bus sometime during the day. I think all of us found some gelato/ice cream at some point each day – that seems to be a Mass Miata requirement. It was amazing to see how the former occupants built into the hills of Quebec and fortified the continuous rock walls so that they are able to be used today and still be in such remarkable condition.  We all found the city to be incredibly clean and friendly. Can you imagine the City of Boston washing the streets and sidewalks every day? Dinner that night was a short? walk through a maze of restaurants and street shows to L’Astral, 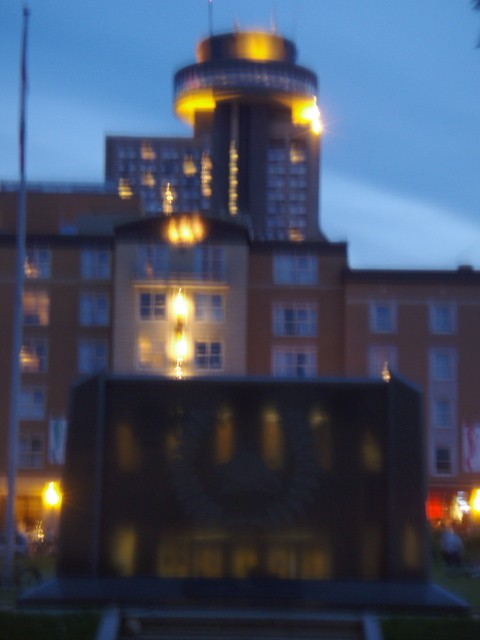 a revolving restaurant 540 feet above the St. Lawrence Seaway atop the Loews Le Concorde Hotel. The view was incredible as was the food. We all walked back in many directions to further explore the city.

Sunday was a rainy day, at times unbelievable downpours and other times a slight drizzle. Our original plans were to go on a ride to the Ile d’Orleans just over the bridge. We all decided to go anyways and had a delightful ride. We stoped at a winery for an impromptu tasting of frozen apple wine among others and were advised as to a nice spot for lunch. Receiving directions for a back road shortcut across the island taking us through some dairy farms we reached our luncheon destination, a cute little place with outdoor terraces on the water.

After consuming some interesting luncheon choices we continued on to chocolaterie de l’Ile d’Orleans. Totally by coincidence while we were entering their driveway from one direction the Smart Car Club was entering from the other. 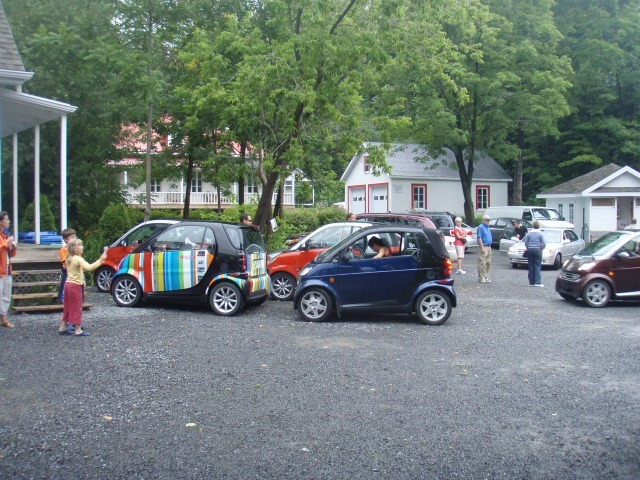 It made quite an interesting entrance. Many of us showed off our Miatas as many of them showed off their Smart Cars. We all enjoyed some chocolate and you guessed it some gelato then started to return to Quebec. On the return we could see some huge waterfalls on the other side so we all continued to view the Montmorency Falls. As the weather was pretty wet we declined the cable car ride to the top but did enjoy the walk along the side to the edge of the waterfall. On a sunny day we would have enjoyed the waterfall drenching a bit more but it was still an interesting find. The latter afternoon was spent with more shopping and relaxing. For dinner we all walked around the corner to a Pizzeria where we found more than pizza but enjoyed a great meal much to our waistline’s distress. The night was again left to shop and enjoy the street musicians and entertainers. After breakfast we all assembled to return home. The weather looked like rain but we started with tops down and the weather actually brightened all the way home. We stopped midway with an urgent bathroom need but after stopping at one place and not being able to use their facilities we continued down the road through a park and actually found a port-a-potty. Need took over discretion so we all made a stop. While using the facility maintenance people actually came to clean the unit – they all had to wait for us but we did enjoy a few capturing pictures and applauded them for coming to our rescue.

We decided to stop for lunch after crossing the border so we could use American dollars instead of converting once again and found a great little Deli. One more stop for facilities and coffee/ice cream we headed in different directions for home.

I know we had an amazing weekend and am guessing everyone else did also.

Thanks Rich & Carolyn for all your hard work for our enjoyment.